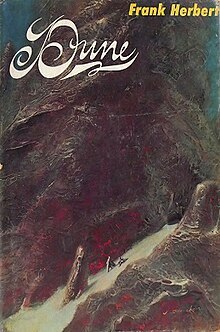 I properly experienced Dune a few years ago (Goodreads tells me it was exactly seven years ago this month) by reading Frank Herbert’s masterpiece. It might’ve been on audio or an ebook, so maybe it wasn’t a ‘proper’ reading. (Here’s my back-of-the-book review if you’re interested.)

But before that, Dune existed to me only as David Lynch’s 1984 movie (awesome if you’re a 10yo kid watching on cable in the ’80s) and the Sci-Fi Channel miniseries (which I revisited on DVD and immediately put in the junk pile. Baron Harkonnen spews his dialogue in rhymes. It’s painful to watch.)

At this point in my life, I demand good stories and Dune fits that bill. And that’s why I’m going back and finishing the first three core books (how’s that for a new year’s resolution!). I’m somewhat glad that Dune hasn’t been adapted repeatedly (exhibit A and B above) and remains fertile ground for the reader to imagine his or her own Arrakis (aka the planet Dune). But the story is being adapted again, this time by one of the most visionary movie directors living – Denis Villeneuve (aka the man behind the Blade Runner sequel.) I have high hopes he’ll get it right. He has made me believe again in the power of film.

But before his vision of Dune comes to the big screen, now is the time to read the book. I’ll admit that Peter Jackson’s Lord of the Rings movie trilogy (just finished rewatching it on Netflix) prompted me to read The Hobbit and then The Lord of the Rings, and I loved the experience. Jackson brought that world to life on the screen, and I was moved by the books, especially Sam and Frodo’s relationship as they struggled through Mordor, with the experience enhanced by imagining the actors from the film.

But honestly, how often do people go back and read a book after watching the movie version? Maybe it’s more than I think, but personally I use the film or TV versions as an excuse not to read the book (exhibit C: The Witcher).

So. Dune. Get It Done. I read this absolutely fascinating commentary about the book on Tor.com. It motivated me down this path. Skip paragraphs 5 and 6 if you don’t want spoilers and happy reading! – Josh

“I must not fear. Fear is the mind-killer. Fear is the little-death that brings total obliteration. I will face my fear. I will permit it to pass over me and through me. And when it has gone past I will turn the inner eye to see its path. Where the fear has gone there will be nothing. Only I will remain.”